Gabion n cylinder of weldmesh of just the right proportions filled with gibber for entrance posts (The Impatient Gardener, Moble 2020).

None of the above should be confused with a Gibbon who would love to clamber all over the finished Gabion.

If you have guessed by now that there have been gabions built here in the last week, you are bang on. The Impatient Gardener with her Patient Offsider have been creating a new entrance to the cottage and gabions seemed a perfect solution, especially as we have unlimited gibber here to use as fill. Incidentally, my research tells me that the fill is referred to as riprap in the trade, so maybe gibber refers to western Queensland gabions. Out here, riprap is possibly the sound you hear when your jeans are caught on the sharp edge of the weldmesh?

Two cylinders of weldmesh were fashioned in much the same manner as if you were making a tree guard and secured in place. The placement seemed quite a critical step as once the gabion is filled, shuffling it over a few feet here and there is not an option. I imagine the Patient Offsider would whole heartedly agree that emptying it and shuffling is no option either. Many loads of gibber later, both cylinders were carefully filled. This filling step involved the selection and placing of stones rather than just tipping in, as the spaces between needed to be filled so the whole effect was not full of gaps and odd angles. As they used local stone, the gabions seem to emerge from the earth, so perfectly are they matched in colour. This gives them an organic feel as they look so comfortable in the landscape and adds greatly to their simplicity and impact.

The Impatient Gardener has cleverly included an irrigation line through the middle of the gabions and has a concealed pot imbedded at the top of each. From the outside, none of this is visible however should she choose to plant something in them, even seasonally, she has the option. As always, she is a gardener with a plan.

I think these gabions are the perfect entrance for the cottage; their simple design does not distract from the sweep of lawn they frame yet they give a definition to the outside space and a wonderful sense of arrival. Happily, they frame the view outwards from the kitchen window as well, which is why it is always good to design from the inside out.

There is an inviting curve that leads on around her gravel drive, behind which is a little grove of trees. She is planning to underplant the area this winter with some grasses and encourage the natural saltbush and ground covers fill in. Another low curving gabion wall would look fantastic following this curve, creating a gentle boundary from inner to outer. It would also be great seating for gatherings (as teenagers the children always called parties gatherings, neither their father nor myself were fooled). As with all these structures, the line and the proportions are all important, and both are just right with the gabion posts.

Moving on to the thumb tacks of the garden, I am about to embark on a Spinderwort eradication campaign. I see from reading I will need to be vigilant, and from where it is in the garden, will be spending a great deal of time on my hands and knees caught up in thorns. Needs must as always, fortunately it is mainly contained to one area, so I feel I need to act before it really spreads. These weeds always seem to gain a foothold when the garden has been stressed; sometimes coming out of a drought period you realise you have been basically watering weeds for months. Annoyingly, it has also gained purchase in the seaside daisy, which will be more challenging than weaners to draft up. I may even have to dig it up and re-plant. If anyone has any no-fail solutions, I would love to hear them.

Happy weeding at your end too, 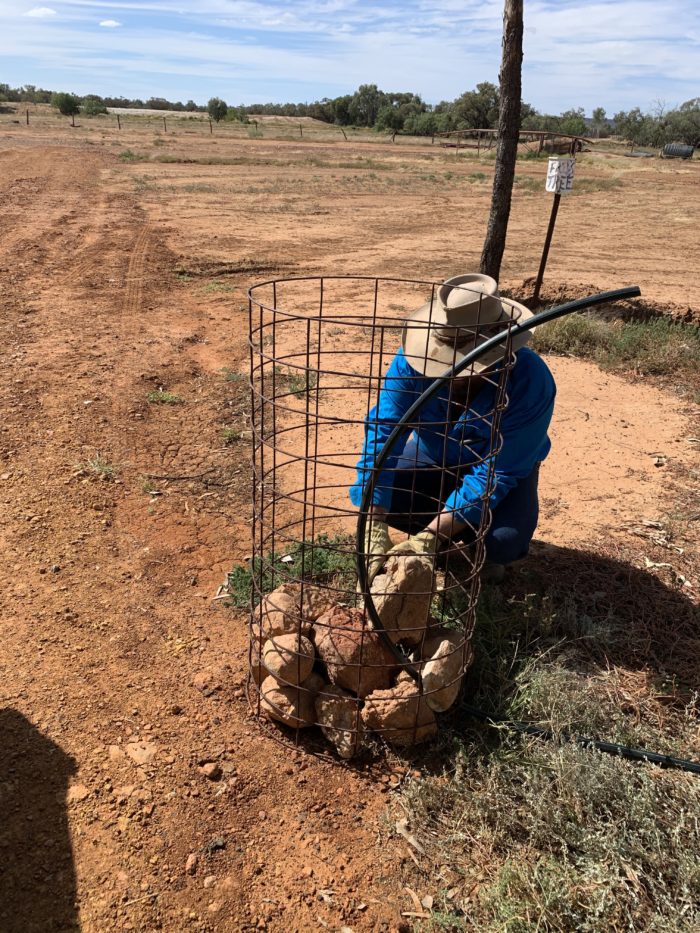 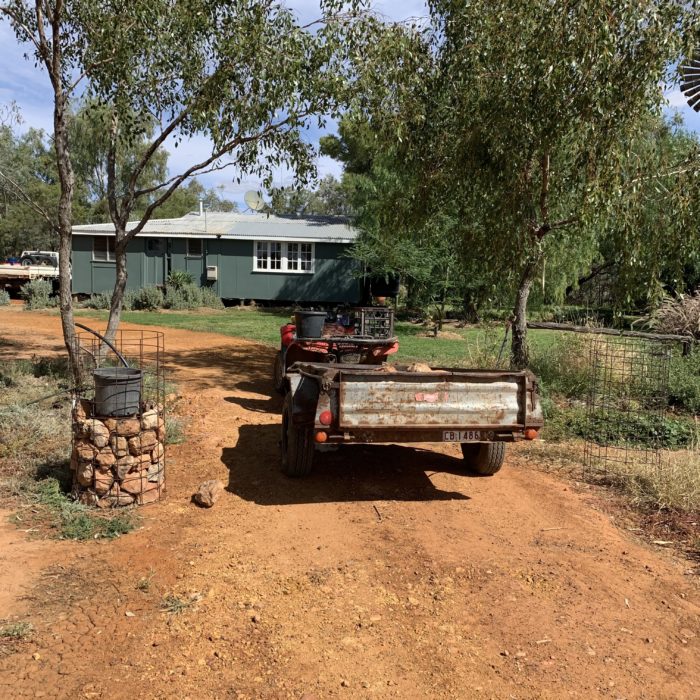 Incorporating a planter and irrigation for prospective plantings 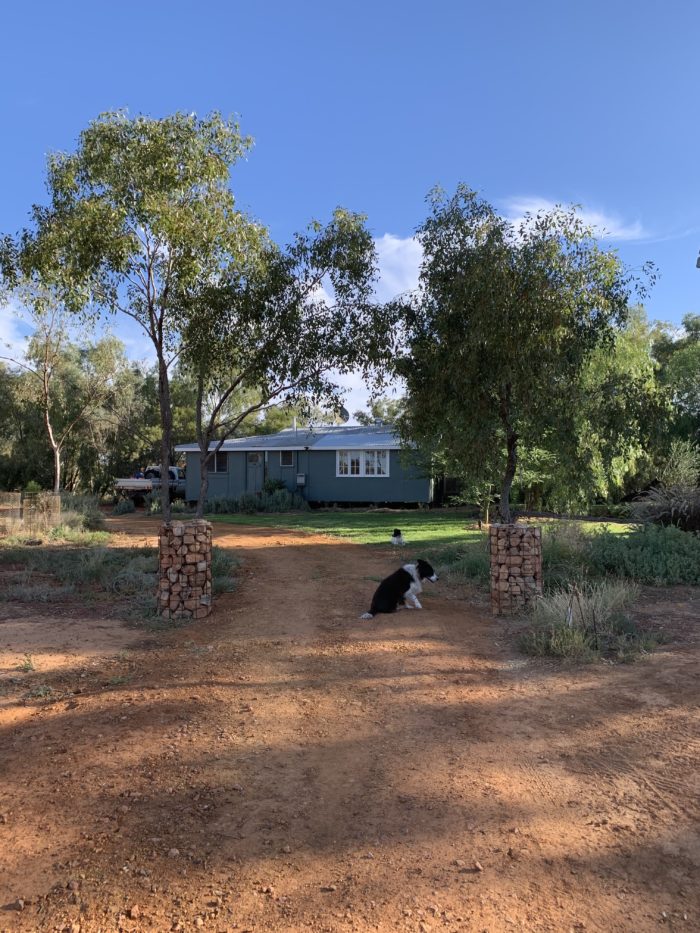 Inspections from the Head Gardener, who emerged from his office underneath the Peach Tree 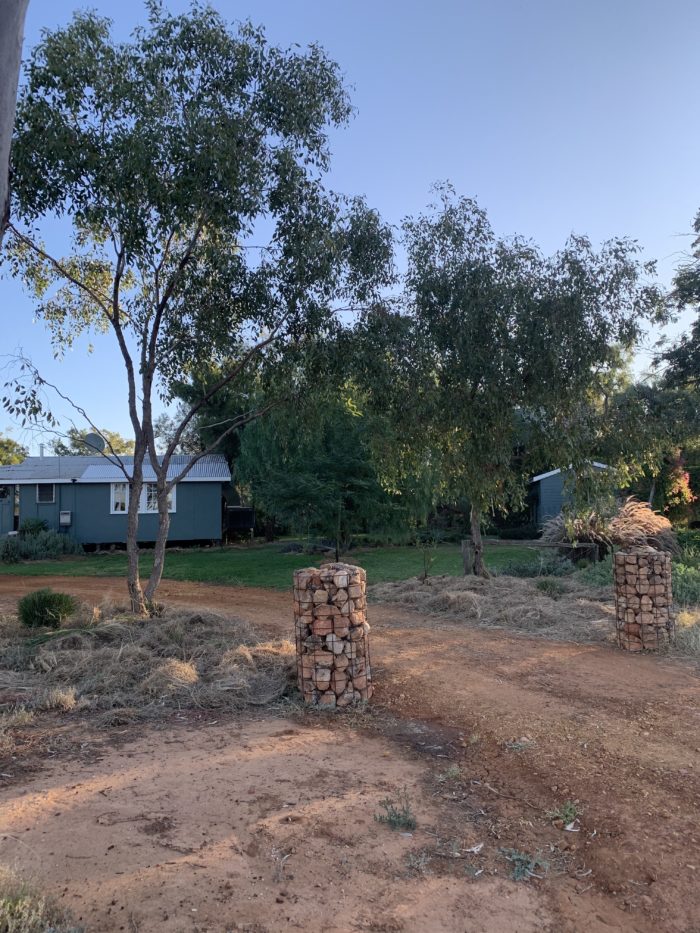 Clumps of Miscanthus have been planted in the beds behind