The air is fresh here this morning and the light so clear; it seems like the whole garden has been polished to a mirrored sheen. We had 18mm rain at Moble this week, soft soaking rain to recharge the earth and us alike.

The garden is responding with a standing ovation; applauding the skies with colour and vigour. So lovely to have the roses blooming and holding, even if only for a few days with this cooler, moist weather. Such a waste when they flower on in the heat, only to shrivel in bud on the stem. Of course, I tell them they are wonderful, however I whisper to them they would be better served to save it all now for Autumn. I whisper so the Cosmos and Zinnias don’t get ideas.

November is with us and every day that dawns with a freshness in the air and ends with a hint of coolness is one less day of summer. These days are to be called upon in January and comfort must be drawn from their memory, for January is rather short on comfort in my experience. As I sit here this morning, a soft northerly is lifting through the French doors, so I shall endeavour to grasp it firmly as well and think of it when the north- west bluster is coating us in dust.

We have had something of an archaeological dig across the creek here recently. The Impatient Gardener has, as predicted, removed the old Hills Hoist form her expanding garden and had been casting around for a new clothesline spot. The suggestion of moving north into the Old Garden was tossed back and forth: there is a wild section where we knew there had been cement laid, avoiding the muddy wait until lawn could be established.

Now, when I say wild, you must picture a rampant Jade hedge (jungle) where we have, not infrequently, seen brown snakes withdraw to; various assorted weeds in season, at times, though not in recent years, almost prize winning Marshmallow; low rock walls suggesting the possibility of pathways in between. Some sixty years ago, there was a lily pond here, however with the disappearance of gardeners and cowboys, it had slowly succumbed to the cycle of floods and silt and was now just a memory. Rather like a soft, cool day in November.

Luckily, the Impatient Gardener has excellent motivational skills amongst her many and varied talents, so she and her two helpers, including her father, plied the shovels for two days and unearthed the wild garden. I had been away for the weekend, so it was both enthralling and exciting to return and discover all that had been laid out, so long ago.

There were garden beds edged in stone; flagstone pathways, hidden under soil and leaf mulch; a vast expanse of cement, perfect for the clothesline or a long table set for forty. This alone was no small effort, with load after load of soil scraped off and carted away, the detritus of years and years of floods. The old rock wall re-emerged after trailer loads of Jade were cut back. Now you could see how the wall swept up to the old Mulberry tree, with another pathway curving around to the enormous Indian Siris, Albizia lebbeck. Yet another path led under this tree to the tennis court, with the old lily pond on the other side.

Brian, by now quite overcome with nostalgia, called his mother, asking if she could recall how deep the pond was? Perhaps we could dig it out, install some sort of native fish farm? (No Goldfish must ever swim in a water feature at Moble; the Bulloo River must remain carp free). His enthusiasm was somewhat dented when his Mother suggested it may have been thigh deep and his daughter suggested if he wanted it dug out, he was on his own!

Fish farms aside, the new clothesline, a very unobtrusive model, was duly installed and once again this now tamer part of the old garden is sitting quietly. The old garden shed has had a late spring clean, its shelves once more filled with terracotta pots, secateurs and fertiliser. The Impatient Gardener is very happily installed, and like generations before her, relishing in having her very own shed to potter in.

I imagine all this action has been looked upon with great interest from the wild garden and the garden shed alike; a bit of hustle and bustle to fill in their day, makes it worthwhile when the next load of leaves is shrugged off. There is nothing like a bit of energy and imagination to invigorate the show and I am sure they will make the clothesline more than welcome. 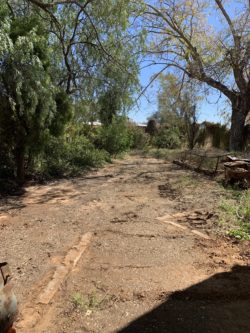 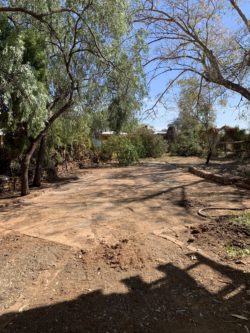